The Ironman World Championships ("Kona") is quickly approaching, taking place Oct. 14th. As you know, it's incredibly competitive to qualify and a major accomplishment to do so. Like last year, we'll be catching up with our local Cinderellas... getting to know them better as a tri community and cheering them on as they get ready for the ball! 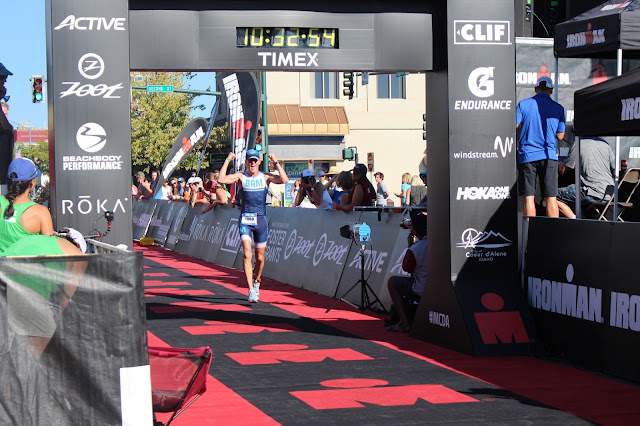 In doing research for this interview, we found a few race results for a “G. Tyler Howland.” Why the G, and does going with this style increase your likelihood of becoming an LDS apostle?

(Laughing) I hope not… I hope not. I did it when I was younger for my business at the time, hoping to sound sophisticated. I don’t think it worked though, everyone thought I was too young anyways. I occasionally register for races as G. Tyler... not sure why I started that habit.

I ran in high school and was offered a walk on position on the Ute cross country team. While on my mission though the men’s team was terminated, and coming home I didn’t want to run anywhere else. A friend who had had a scholarship at the U convinced me to do TriUtah’s Jordanelle triathlon in 2005. I still remember thinking I was gonna drown in the swim, and cycling has never been my strong suit. I remember coming off the bike thinking my legs were gonna be dead, but they actually felt pretty good for the run.

Your name doesn’t show up in a ton of local results… are the rumors true about you simply being “The Natural?”

Haha, I would not call myself a natural. It’s true that I don’t race very much… for example, last spring was my first Half and CDA was my first Ironman. I’ve been more of a runner, but the CDA run was only my 3rd marathon after St. George and Boston. I’m still new, that’s for sure, and still have a lot to learn. 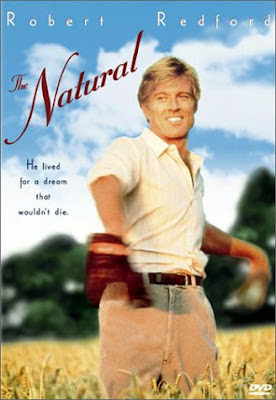 It appears you’ve improved a lot on the bike. Has that just come with time & volume, or specific changes to your training?

The improvement has definitely been because of BAM. I contacted Wes thru a friend in 2015, and eventually Jen Johnson became my coach. She pounded into me that the key is consistency. I did the BAM cycling sessions as really my first full, consistent year of training. Right before Boulder 70.3 I decided to take a second lactate threshold test, and my levels had jumped by over 30%. I still have a long ways to go to be considered a good cyclist, still probably another 30%. But honestly, next to my wife my biggest cheerleaders have been the coaches at BAM. 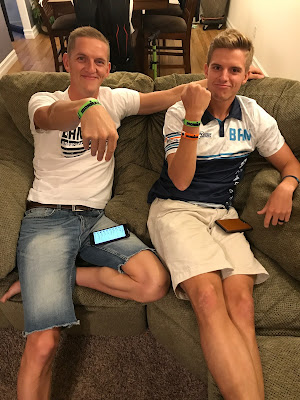 What were your expectations going into CDA, and did you know your position throughout the race? (For example, 17th in your AG off the bike, then from 6th to the critical 4th around mile 22).

Kona was not on my radar at all, and I really owe it to my little brother Alex. When it was announced that this would be the last CDA, my wife said “you’re gonna be up there watching your brother anyway, why don’t you just do it?” I signed up a month before. Oceanside and Boulder 70.3 was really my plan for this season, but with my brother as my training partner I went on three 100 mile rides even though I wasn’t training for an Ironman per se. I knew I could finish, but had no idea how it was going to feel. People would say “you did great at that 70.3 but an Ironman is completely different” and I’d think hey thanks for the motivational speech there.

I did have a conversation with Jen two weeks prior and asked what it would take to get to Kona. The realistic response was “a couple years of really consistent training.” To go and perform as I did, I definitely didn’t expect it, although in hindsight I did put in a lot of work. 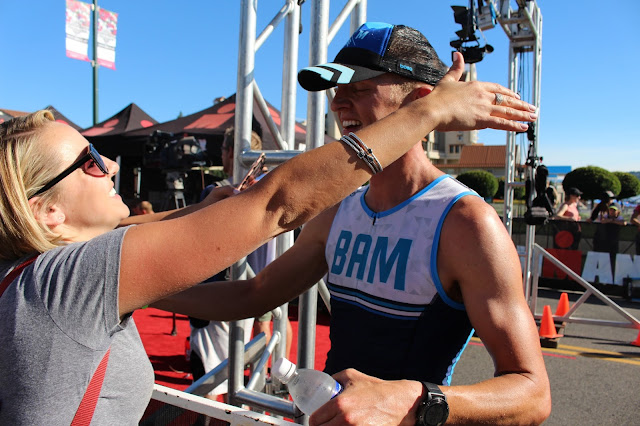 In terms of my position, I had no idea until the 3rd lap of the run. When I came around to finish the 2nd lap my wife and family were there. My wife gave me crap at Boulder for not stopping to give her a kiss, so I did this time. My wife said “I love you but you could get a Kona spot, you need to go!” and I heard my brother say I was in 7th place. For me the darkest spots of a marathon are miles 16-19, but when I heard that it helped me snap out of it.

On the last lap I knew I had passed a couple guys in my AG from the numbers on their leg, and one asked me what lap I was on. I just held up three fingers, not out of disrespect, that was just all I could muster. I finished and spent a little time in the med tent, then saw Ashley and Captain Matt Davis (who is going back to Kona himself). Matt said...

Editor's Note: it was captured on video, check out
Tyler's shock when he finds out below!

"It didn’t fully register until the next morning."


Walk us thru the race. Did you feel “good” most of the day, or really have to grind to hold off three AG competitors by ~5 min?

On the swim I felt amazing. I just kept thinking “dude, you’re doing an Ironman!” Same for the first 50 miles of the bike. This is awesome! The first dark spot was as I was finishing the first loop of the bike. Quick backstory – my wife wasn’t supposed to be there, but at 3:30 AM she took an Uber to the airport, flew to Seattle then Spokane, and got to the race as I’m coming thru town after the first bike loop and really mentally hurting. I see her standing there with a giant sign and that pulled me out of it. The next 42 miles were the shortest of the race. It was a surreal day with her surprising me on the course and then Matt/Ashley surprising me at the finish. 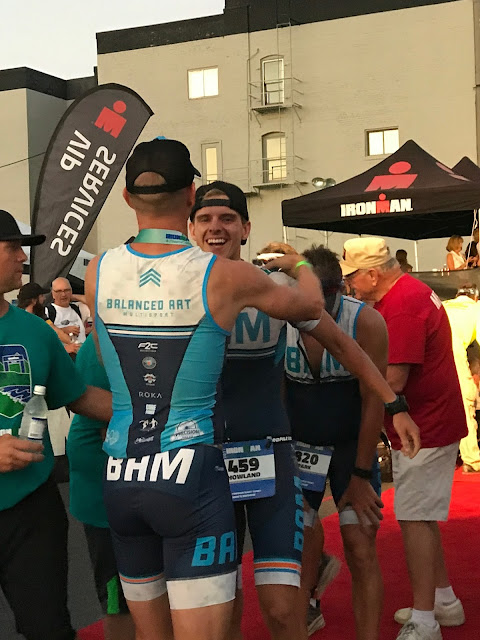 On the run, I started a bit quick, so backed off the pace. I told myself to not look at my watch for the next loop, and just went by feel. It was hot, but I was getting through ok. Coming around the park for the 3rd loop though I yelled to my wife that I was gonna have a breakdown… I didn’t think I could do one more. She actually didn’t hear me, yelling back “what??” and I think her not hearing me say it helped me focus back on the race. The next few miles were pretty difficult, a mental grind, but I felt good again after I hit the last turnaround with a few miles to go. 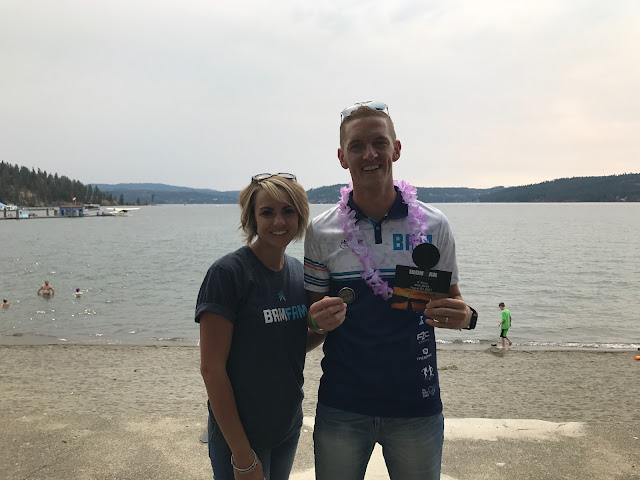 How did you celebrate?

I celebrated by eating whatever I wanted for the next few days and inviting anyone who wanted to come to Kona! Ironically we were already gonna be in Maui on the 13th of Oct… now we’re just leaving a few days earlier and making a pit stop in Kona. It worked out.

What are your expectations / goals for Kona?

I’ve been watching Kona coverage for 20 years. Just to be there and soak in the experience as a participant will be amazing. If off the bike I’m feeling good I’ll give the run a go, but I wanna have fun. I’m not gonna place in my age group... hopefully top 200 in my age group! Finishing with family there and enjoying the day as much as I can, that’s the goal. 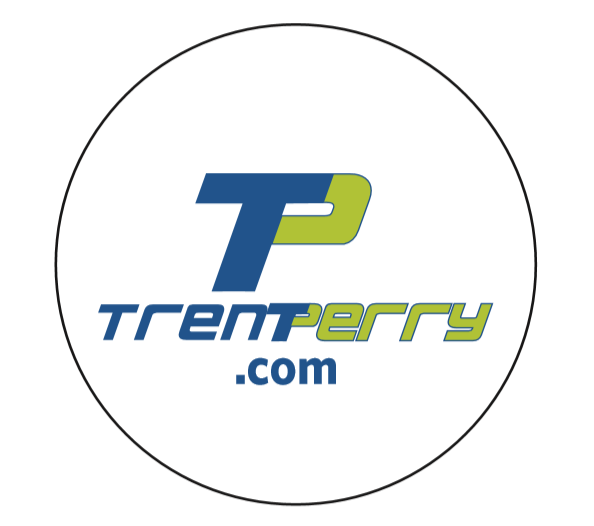